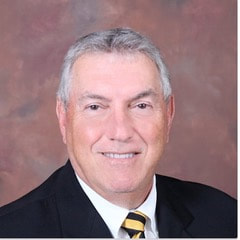 ​Richard D. Brasco is a native of Jeannette, Pennsylvania where he graduated from Jeannette High School. He has a Bachelor of Science Degree from St. Vincent College in Latrobe, PA, and a Master of Music Education degree from the University of South Carolina, Columbia, SC.

Mr. Brasco is an educator with thirty-five years of teaching in Georgia and South Carolina before retiring in 2003. Concert, jazz and marching bands under his direction have performed at the Georgia and South Carolina State music conventions, ASBDA National Convention in Atlanta, GA, the University of South Carolina Conductor’s Symposium, The University of Georgia Winter Music Festival, The Macy*s Thanksgiving Day Parade in New York, the Lord Mayor’s Parade in London, England, Westminster Central Hall, London, England and the Easter Festival in Maastricht, the Netherlands. His bands have received consistent Superior ratings in level VI music in festivals and contests in Georgia, South Carolina, Florida and Tennessee. He has served as guest clinician/adjudicator in London, England; Edinburgh, Scotland; Alaska, North and South Carolina, Georgia, Pennsylvania.

The GMEA “Distinguished Career Award” was presented to Mr. Brasco at the 2018 GMEA InService Convention. He is a six-time recipient of the National Band Association Citation of Excellence and the ASBDA/Stanbury Award. He received Teacher of the Year and Star Teacher on three occasions in Columbia County and at Evans High School. Mr. Brasco was awarded the “Golden Apple Award” from WJBF television and was featured in the national “Band and Orchestra” magazine article: “Educators Who Make a Difference”.  In 2008, Mr. Brasco was inducted into the “Wall of Fame” at Evans High School. He received the “Career Service Award” from the Amercian School Band  Directors Association in 2001. Mr. Brasco had the opportunity to guest conduct the UnitedR States Army Field Band from Washington, D.C. while they were on tour in the Southeast. Mr. Brasco has three band compositions that have been published by JW Pepper, TRN and BRS publishers. Those pieces are: “Balancing Act”, “Wiegala- a Jewish Lullaby” and “Down At Skeleton Cove”.

Mr. Brasco currently resides in North Augusta, South Carolina with his wife Barbara. Their son, Craig, lives in Marietta, GA with his wife Erika, their daughter, Natalie, and son Nicklaus. Their daughter, Mia, lives in Charlotte, NC with her husband C. Allen Miller, and daughters Penelope and Julia.
Powered by